Brothers: A Tale of Two Sons — The Long Journey to Mobile

By Antonela Pounder
on October 22, 2015
@AnimatedAnt

Brothers: A Tale of Two Sons — The Long Journey to Mobile

In August 2013, 505 Games, in partnership with Josef Fares and Starbreeze Studios, released Brothers: A Tale of Two Sons — a dark fairytale about two brothers searching for the cure to save their ailing father. For Josef, it was a deeply personal game inspired by his childhood in a war-torn Lebanon. For everyone else at Starbreeze and at 505, it was a labor of love, years in the making.

By any standard, Brothers was an unconventional game: an emotional fable launched into a market dominated by action games; a character-driven story that contained no understandable dialogue; and an unprecedented design centered around controlling two brothers simultaneously. I speak for many at 505 Games when I say that Brothers is my favorite game we’ve ever released, and one of my favorite games of all time.

Despite all odds, we’re immensely proud of what Brothers has achieved — including the BAFTA for Best Game Innovation, and the VGX Award for Best Xbox Game (beating out Grand Theft Auto V, BioShock Infinite, and Tomb Raider). Although Brothers was never a blockbuster, the game’s fanbase — including PewDiePie! — has been incredibly supportive. The game is also now available on PS4 and Xbox One with improved HD and a director’s commentary.

But to some extent, we’ve always thought it was a shame that Brothers would only be available to console and PC audiences. It’s not a hardcore game. I have “non-gamer” family and friends who I’m sure would love Brothers — if only they had a way to play it. The game’s world, its story, even its gameplay — unusual as it is— are immensely accessible. Perhaps, we reasoned, if we could find a way to adapt Brothers for touch screens, we could present it to a wide, new audience. Basically, to the widest audience that exists.

So that’s what we set out to do. 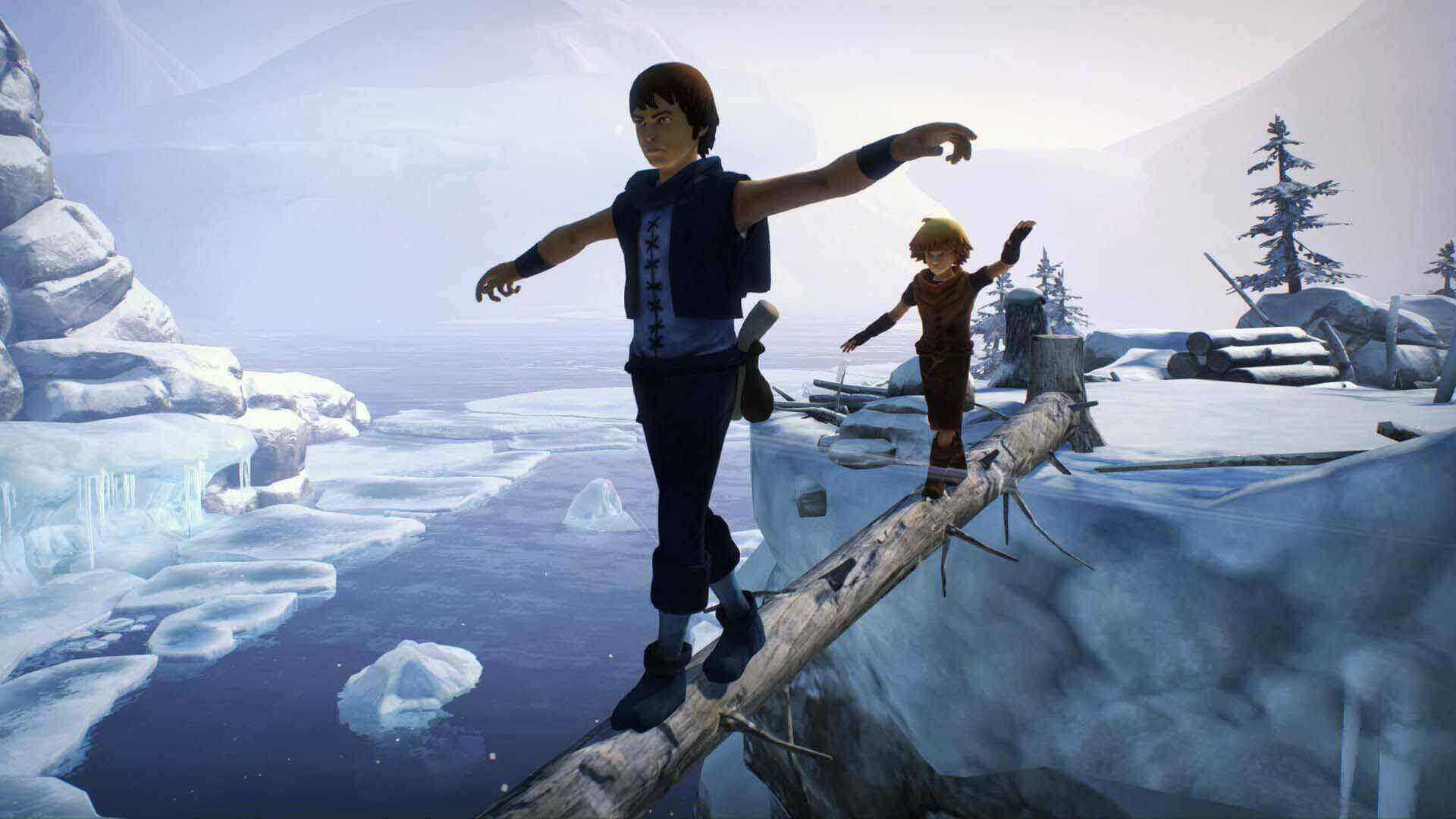 Crossing Over to Mobile

Transitioning Brothers to phones and tablets would be involved from the very start — the game was intended for console hardware, and features complex 3D scenes, sophisticated graphics shaders, and advanced physics middleware. But mobile devices have made huge advances with features like Apple’s Retina displays and 64-bit processors. We were also fortunate that Brothers was built in Unreal Engine 3 — an engine used by hundreds of teams, and that already supported mobile platforms “out of the box”. Less fortunate was the fact that very few studios had actually shipped UE3 games on mobile. And regardless, almost all the teams were migrating to the new version, Unreal Engine 4.

We were extremely lucky that we were able to find the needle in the haystack, one of the only teams with lots of experience shipping Unreal 3 games on mobile — the joint force teams at Turn Me Up Games and Black Wing Foundation.

They spent tireless hours overcoming the technical challenges — including optimizing textures and lightmaps for almost every surface by hand — to get the game up and running.

We’re in awe of what they were able to accomplish. The game uses many of the exact same assets as the original version of the game — yet displays at a higher HD resolution — on mobile hardware. Again, it’s hard to overstate what they’ve achieved.

With the technical hurdles at least under control, we could focus on the equally formidable gameplay ones.

It bears repeating: the core mechanic that drives the entire game is moving both characters simultaneously. It’s what makes the game completely unique, and is integral to the story and its themes. If we couldn’t solve movement, we had no game.

On console, the controller’s left and right thumbsticks directly corresponded to each brother. While some touch screen games prefer solutions like touch-to-move, or swipe-to-move, for gameplay designed around a console controller — and the continuous, precise directionality it provides — there’s really no alternative to the virtual joystick. Thus, we quickly decided on virtual joysticks as direct replacements for physical ones. Usability researcher Graham McAllister has a great writeup of best practices, and we also reached out to him and his team at Player Research for feedback during development, which was invaluable. 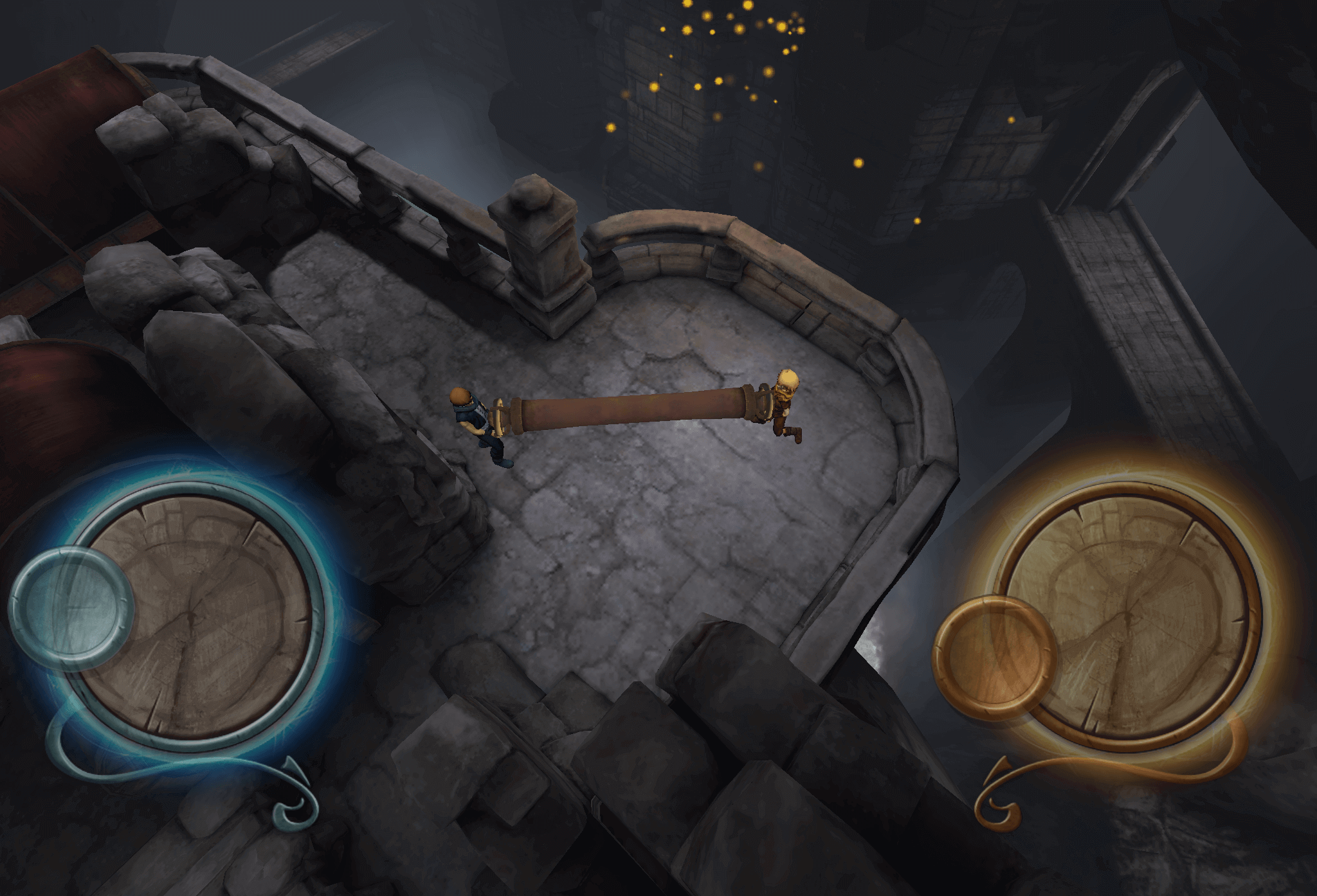 Interestingly, virtual joysticks afforded us an opportunity that physical ones do not — namely, the opportunity to communicate visual feedback, since they’re always in the field of view. For starters, we could color-code each stick to match each brother — helping to ease ambiguity for players if they get disoriented. Another helpful feature we discovered was that the virtual sticks could provide feedback as to whether a brother is near, or actively engaged with, an interactive object. They could glow. It’s subtle, but we found it really helped.

As we plowed forward with our solution, we also quickly realized how many completely unique types of obstacles the player needs to navigate: water, rocks, ledges, ropes, chasms — to name a few — each requiring a completely unique approach for touch. For many, we could provide smart assistance to interpret the player’s intent. But for many obstacles, and many puzzles, we’d need a way to allow players to perform actions as they moved.

Interacting with the World

With a controller, performing actions was easy: the player uses the left and right triggers, which can be activated independently, and simultaneously, with thumbstick movement. Phones, of course, don’t have triggers — yet we needed to find a solution that would work for the many puzzles in the game where the player would need to toggle actions rapidly in combination with movement. After dozens of iterations, we finally settled on an approach that felt intuitive and, surprisingly, covered most situations: touching and holding the virtual joysticks would initiate an action (grabbing an object, yelling, etc.); and releasing the joystick would cancel it. It’s an unusual solution, for sure — I can’t think of any other touch screen game that employs it. But once you learn it, we hope, it becomes second nature. And again, this is a solution that wouldn’t be possible with physical thumbsticks — it’s completely unique to touch.

As a backup solution, we also worked to allow players to touch nearby objects directly to interact with them. Watching playtesters, especially young ones, we observed that many would immediately try to touch objects to interact with them. While this isn’t necessarily the “best” way to play the game for how it was designed, we felt it was important to support what players naturally tried to do. 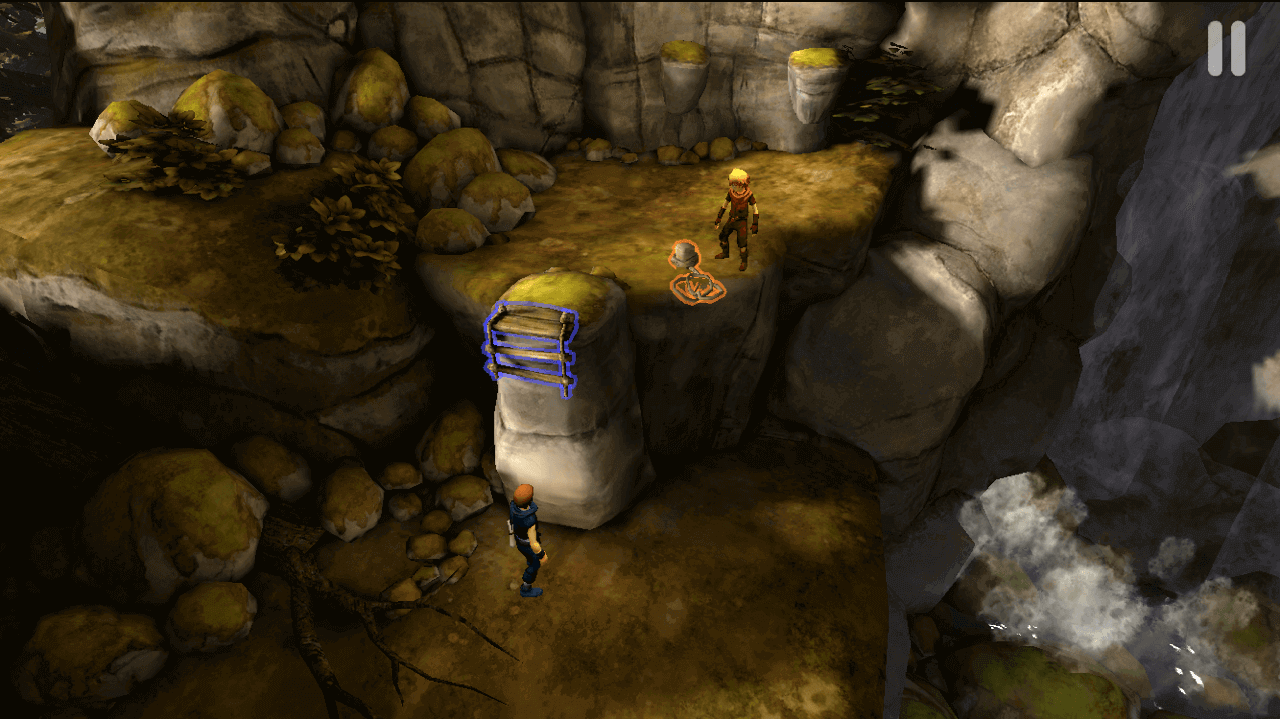 The other lesson we learned from young and casual playtesters was that one of the game’s most significant barriers was players not understanding which game objects they could and could not interact with. Many modern games use the convention of highlighting for interactive objects — but Brothers, in its original form, did not. This was an active choice to give players a minimal user interface, an unobstructed view of the world, and the thrill of discovering something interactive. For hardcore gamers who’d absorbed decades of game conventions — and learned to intuit what types of elements were interactive (and how to experiment when they do not) — this was fine. But for a wider mobile audience, without this body of knowledge, this was an issue. The solution was to bring object highlighting into the game, which again we could color-code for each brother.

One of the last major hurdles was the camera controls — which tend to be difficult for any game. The original development team, after much trial and error, settled on using the controller’s shoulder buttons to rotate the camera. Naturally, this too was unavailable to us. Luckily, the hardworking mobile team managed to find a combination of familiar touch gestures, such as swipe and pinch-to-zoom, that would serve our purposes.

Without revealing too much, I’ll say that the rumble sensation that a physical controller brings was crucial to the ending of the original game. Again, we had to improvise. But here too, we were able to draw on the visual feedback that virtual joysticks can provide, and we worked closely with Josef to find another way of achieving the same artistic intent. We’re really happy with what we came up with, and believe it will bring an equal sense of emotional power. 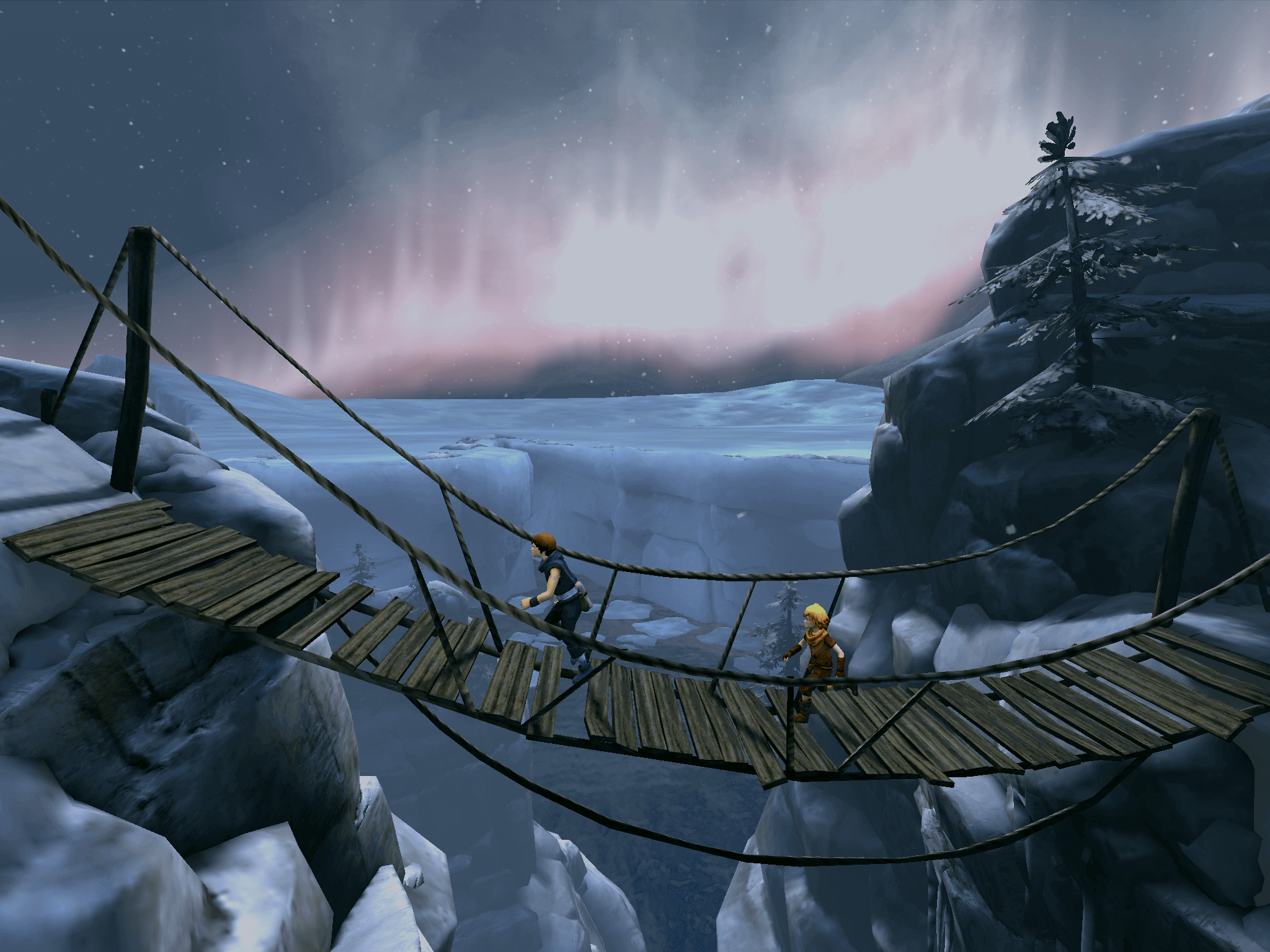 There’s something keenly affecting about holding Brothers: A Tale of Two Sons in your hands. Something magical about touching the fairytale world and seeing it respond. For all the challenges, it’s a unique way to experience the game that is only possible on touch devices.

As we’ve developed this new version, I’ve played through it dozens of times — and I still get choked up. I still have to hold back tears. I can’t help but think this is extraordinary for a game on a five inch screen. Now, all we can hope is that the experience remains as evocative for others as it is for us — and that this new format allows the game to reach the wide audience we deeply feel it deserves.

After many more years, and much hard work, the combined talents of Josef Fares, Starbreeze Studios, Turn Me Up Games, and Black Wing Foundation have achieved something we believe is truly singular.

We love this game, and it’s our humble honor to present it to you on touch screens everywhere.

Brothers: A Tale of Two Sons is available on the iOS App Store for $4.99.